The Wisdom of Eddie the Eagle

I recently watched the movie Eddie the Eagle on Netflix, the story of Michael “Eddie” Edwards, a ski jumper who represented Great Britain at the 1988 winter Olympics in Calgary, Alberta.  He was the first ski jumping competitor to represent Great Britain in the Olympics since 1929 and the only member of his team. Eddie finished 73rd out of 73 competitors in both the 70 metre and 90 metre jumps. So, why would anybody make a movie about someone who finished last? 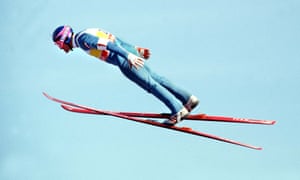 I remember Eddie and his appearance at the Olympics. Although he did not win he became a symbol for doing your best and having a positive attitude. He became a beacon of positivity and a joy to watch. In the end, he was possibly the most revered participant at the Olympics that year.

Obviously, Eddie will not go down in history as a great ski jumper, but he will be remembered for his tenacity, his willingness to keep trying and his undeniable positive attitude. When Eddie did what others considered a terrible jump, Eddie chose to focus on the fact that he had set a new British record.

In my mind, we can all learn something from Eddie the Eagle. Too many people put forward the least amount of effort possible and then bemoan the fact that they have failed. Sometimes people only try once and then determine that the world is against them. Instead of listening to their inner voice and their own self-knowledge, they listen to the voices of those who tell them that they can’t.

Recently, Eddie returned to Calgary to mark the 25th anniversary of his Olympic glory. Waiting for him were some children who had seen the movie and knew Eddie’s reputation. They saw him as an inspiration and a role model.  To them, Eddie was a hero.