For many years career counsellors have promoted the theory of finding your “dream job”, and we career counsellors and coaches were keen to help people find them. The theory was that there was a “perfect” job out there somewhere, and with our help people could get the job of their dreams. We were excited by the prospect of helping people get the job that would fulfill them and make them happy to leap out of bed each morning and work happily at that job all day. And that is still a great idea and a good goal. However, the labour market has been changing.

Back in the early 1900’s jobs were scarce and people were happy to get a job; any job. When Henry Ford offered the possibility of earning up to $5.00 a day for labouring in his Ford Motor Company, thousands showed up to get those well-paid jobs. No matter that they were gruelling, unrelenting jobs. They were a job and they were well paid. Never mind that you weren’t cut out for the work. If you could get this job, you were happy to take it.

Over time, jobs became plentiful and people were able to pick and choose between jobs. In the 1960’s and 70’s a person could set out to find work in the morning and be working in a new job by afternoon. If they didn’t like that job, they could leave and get another one the next day. 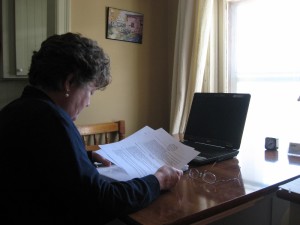 With the bounty of jobs ripe for the picking, the notion of an ideal or “dream job” evolved. People began to understand that they could actually find a job which would make them happy. We career practitioners were delighted to have the opportunity to guide people to those jobs. We had the tools and the expertise to get through the morass of possibilities.

In recent years, however, the notion of a “dream job” has faded as the economy slows and social changes impact the Labour Market. Jobs are fewer and farther between and harder to get. According to the laws of supply and demand employers can set specific requirements for available jobs and only consider applicants who meet their criteria. Conversely, job seekers are sometimes forced by financial constraints to take jobs that are not a good fit for them. We do what we have to do to survive.

Once realized, it must be followed up with nothing less than a spectacular resume and cover letter. This is not the time to send in your tired, old resume. You only have one shot at making an impression with the hiring personnel. It is also important to realize that the hiring process is far different from that of even a decade ago. It’s important to research how hiring is done and how to manage the perils of the internet and on-line applications.

So, don’t stop looking for your “dream job”, but don’t let the process turn into a nightmare.